Home / About First Parish / About our sanctuary

Our Newest Addition to Our Sanctuary

The work to update and improve the chancel furnishings in the east alcove began in 2015 when our minister used a lecture and a pile of milk crates to create the kind of functionality she really wanted in a pulpit.  While this accomplished the functional goal it was not beautiful.
Fund raising for a new pulpit began and was quickly met with support from the First Parish Women’s Alliance which provided the majority of funds for a pulpit and chancel furniture. The commission was awarded to Eli Cleveland, a local furniture maker and instructor at the North Bennett Street School who had outstanding experience in this kind of work.
Eli spent time with our minister, our DRE, in our sanctuary and with the Sanctuary Redesign Committee members to understand the needs and propose some designs.  Two designs were reviewed by the Minister, DRE, Worship Associates and Property Committee with consistent support for one design. The pulpit and chancel furniture were installed in time for dedication on Easter Sunday 2018.  The back wall was painted in a tuscan style by Karl Ambrose.  The slat wall was reengineered to include two pulleys for the display of art pieces that change over time; these were built and installed by Andrew Fischer.
Mosaic 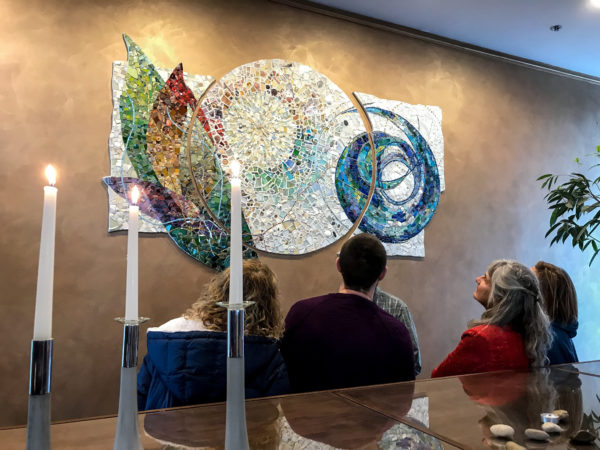 The art work on the east wall was dedicated in December 2018.  It is the result of a listening process with the congregation to define the qualities of a permanent piece of art, a competitive RFP process, meetings with three finalists and wonderful coordination with Cynthia Fisher, the artist selected.  The “Dedication of the Sanctuary Mosaic” provides some background on the many contributions from our congregation that are incorporated into the mosaic. We hope you enjoy finding beauty and meaning in it for yourself. 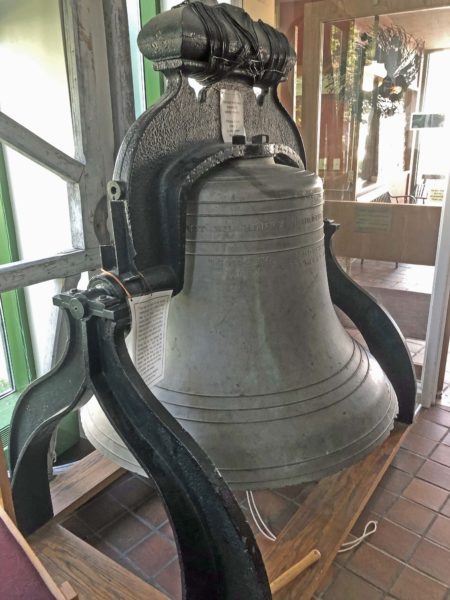 Our Bell:  The sanctuary houses the historic bell from the steeple of our fourth meetinghouse, which burned to the ground in March 1975 as the congregation was preparing for the nation’s bicentennial. Though the bell cracked when it fell and could not be rehung, we ring it inside the church each week as a way to honor our connection to those who came before us and to create an atmosphere of reverence.