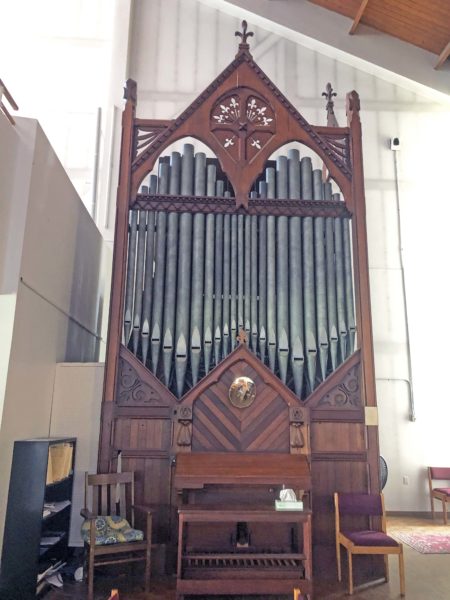 Sixteen rank 1869 E. & G.G. Hook tracker organ, op. 523, Our organ was dedicated on September 22, 1985. Organist Theodore May contributed the following notes about the instrument to the dedication program.  See more below.

A Kawai grand piano and a historic Steinway grand piano are our main performing instruments. The Steinway is a legacy from Bertha Yerrington, a long time member at First Parish. For many years, Bertha made her home a welcoming place for First Parish musicians and many fine concerts were held there. She willed the beloved Steinway to First Parish on her death.

The Kohler & Campbell Cherry spinet was donated in 2011 by Harriet Franklin and the Perkins School for the Blind (Watertown, MA), and the Story & Clark upright piano in the Vestry was donated by Cynthia Winfield, a retired English teacher from Ottoson School (and a member of the Follen congregation) who moved to Tennessee in 2008.

Church Bell from the Fourth Meetinghouse steeple, rung at the beginning of each Sunday service

Our organ was dedicated on September 22, 1985. Organist Theodore May contributed the following notes about the instrument to the dedication program.

“The Boston firm of Elias and George G. Hook built this organ in 1869. The cost was $3000, in a time when skilled workers put in ten hours a day (a half day on Saturday) of $7 to $10 a week. It can thus be seen that the organ was an expensive, high quality instrument in its day. It was built for, and installed in, Christ M.E. Church in West Philadelphia. On February 28, 1870, the Philadelphia Enquirer reported on the dedication of the new church and its organ:

At the rear end is a large triple window; at the left end of the recess the magnificent organ has been built. So much has the art of organ-building improved of late that for this sum ($3000) three or four times as much organ can be purchased as would have been the case a dozen years ago. This instrument has two finished fronts, and the rich and solid walnut with the gilded pipes present a beautiful appearance, and complete the harmonious effect of the interior of the chapel.

In brilliancy this new organ exceeds [two other organs installed in Philadelphia by Mssrs. Hook]. In fact, the loud voicing, which is characteristic of these builders, would easily drown an ordinary choir if not restrained. But as the Methodist Church adheres strongly to the system of congregational singing, this will be rather an advantage than otherwise.

Robert B. Whiting, the gentleman from whom the present owners purchased the organ, writes:

By the 1960s the neighborhood of the church had changed, the old congregation dwindled, and finally the church was sold to another congregation who did not use the organ. By this time the organ was practically unplayable because of huge air leaks in the reservoir, many broken trackers, and various mechanical problems. It was in danger of being ripped out, and the pipes sold for scrap metal. However, I knew the true potential of the organ and so I bought it and invested much time and money in removing it, completing the necessary repairs, making all new trackers, and erecting it in my studio (in Schwenksville, PA). E. & G.G. Hook organs in original, unaltered condition seldom are available at any price. Mine has all the original pipe work. Except for the removal of the hand-pumping mechanism and the replacement of the old hitdh-down swell by a swell pedal, the organ is substantially just as it was when it left the Hook factory…

In October, 1981, First Parish acquired Opus 523 from Mr. Whiting, and a team headed by organ builder Richard Nickerson of Melrose, including church member Lyman Judd, brought it to Arlington. After seeking competitive bids, the Music Committee selected Mr. Nickerson to refurbish and erect the organ in its present location. Ernest Gariepy, then a Music Committee member, assumed the complex and laborious task of restoring the fine walnut case. It was a work of signal devotion, to which Ernest and his wife Barbara gave hundreds of hours of time and skill. For months the Gariepy garage, basement, and even living room were the scene of this unique effort. Otheres who helped included Laurie Cleveland, Ernest Sabine, Robert Olson, and Charles Grady.

To bring Opus 523 into concert condition, considerable renovation and restoration work was accomplished by Mr. Nickerson, such as the repair and voicing of the pipes, fabrication of new trackers, installation of new leather bushings and new bellows for the wind chests. A silent, high-efficiency blower of modern Swiss manufacture replaced the ancient electric blower. Ernest Gariepy arranged for a cabinetmaker to renovate the pedal keys in fine hardwoods.

Dozens of people contributed to the special Organ Fund making all this possible. Notable matching gifts of $1000 each were made by the Gariepys, the Sabines, and the Zuckers. Many musicians, both from within and outside the congregation, presented recitals and concerts for the benefit of the fund. To all who assisted in this effort, the Music Committee extends heartfelt thanks.”

The dedication program, played by Theodore May and with participation of the First Parish choir and a number of instrumentalists, included works of J.S. Bach, César Franck, G. F. Handel, Jehan Alain, and a commissioned work by Alan Hovhaness “The Waves Unbuild the Wasting Shore,” for choir, tenor soloist, Ernest Gariepy, and organ. Music Director Kenneth Seitz, wrote the following note on the Hovanness commission:

Alan Hovhaness was born in Somerville, Massachusetts, and spent most of his youth as a resident of Arlington, graduating from Arlington High School. Thus it was felt to be highly appropriate that this renowned American composer be commissioned to write a work specifically for this occasion. The result, to a text by the nineteenth-century Unitarian Oliver Wendell Holmes, Sr., here receives its premiere performance. Mr. Hovhaness presently lives in Seattle, Washington.

Some history — Church Organs in Arlington Unitarian and Universalist Churches

The first organ in the Unitarian Church was installed in 1840. Research thus far has failed to reveal the builder. It burned with the church building on New Year’s Day, 1856.

The second organ was built in 1856 by E. & G.G. Hook of Boston, their Op 207, a two-manual and pedal tracker of about 20 ranks. It was situated in the rear gallery of the new building, dedicated on New Year’s Day 1857. It survived the 1871 tornado, as the steeple of the church fell into the street, rather than through the roof.

The third organ, the work of Cole & Woodberry of Boston, was installed in the rear gallery in 1890. It was a three-manual tracker of about 29 ranks. During a major church renovation and expansion in 1911, it was moved to the front of the church.

What must be considered the fourth organ, actually a major rebuilding of th 1890 instrument, was installed in 1926. The contractor was James Cole of Melrose, one of the original builders. He put in electro-pneumatic action in place of the trackers, and added several stops. The cost of the rebuilding, about $8,000, was contributed by “the Music Committee and a few friends.” The 1926 rebuild itself underwent additional changes over the years, and was totally destroyed with the building in the 1975 fire.

The first organ of which we have any record at the First Universalist Church was also an E. & G.G. Hook organ, Op. 478, with two manuals and a pedal. Another two-manual and pedal instrument replaced it in 1896, built by Hook and Hastings of Boston, Opus 1731. Both still exist — the 1869 instrument in a Roman Catholic church in Nashua, New Hampshire; the 1896 organ at the Unitarian Universalist Church in Haverhill, Massachusetts, relocated there through the Organ Clearing House when the Greek Orthodox congregation purchased the Universalist building.

Note: The Organ Clearing House, Harrisville, New Hampshire, was founded in 1959 to facilitate the relocation of fine church organs which might otherwise be destroyed. It has found homes for more than a thousand such instruments in churches and schools throughout the U.S. and Canada. Its director, Alan Laufman, is an Arlington native who graduated from Arlington High School in 1953.